May 2020 edition of African Pilot

A helicopter, sometimes referred to in slang as a ‘chopper’ or ‘helo’ is a type of rotorcraft in which lift and thrust are supplied by horizontally spinning rotors. This allows the helicopter to take off and land vertically, to hover, to fly forward, backward and laterally. These attributes allow helicopters to be used in congested or isolated areas where fixed-wing aircraft and many forms of VTOL (Vertical Take-Off and Landing) aircraft cannot perform.

The English word helicopter is adapted from the French word hélicoptère, coined by Gustave Ponton d’Amécourt in 1861. Helicopters were developed and built during the first half-century of flight, with the Focke-Wulf Fw 61 being the first operational helicopter in 1936. Some helicopters reached limited production, but it was not until 1942 that a helicopter designed by Igor Sikorsky reached full-scale production, with 131 aircraft built. Though most earlier designs used more than one main rotor, it is the single main rotor with anti-torque tail rotor configuration that has become the most common helicopter configuration. Tandem rotor helicopters are also in widespread use due to their greater payload capacity.

For many reasons, world airlines are suffering from their own success. At the start of 2020 with more cities were connected throughout the world than ever before, but then COVID-19 that spreads like wildfire, hit the globe. The combination of the two factors has resulted in a world never seen before: empty. Abandoned city squares, monuments, museums, parks and especially airports point to a disconnected globe. The now disconnected globe means that the airline industry that relied on connecting the dots is grounded and airliners are being stored wherever there is space at airports.

Covid-19 is fatal for people with compromised immune systems. The same can be said of companies with weak balance sheets or in the case of the national airline – no balance sheet at all. 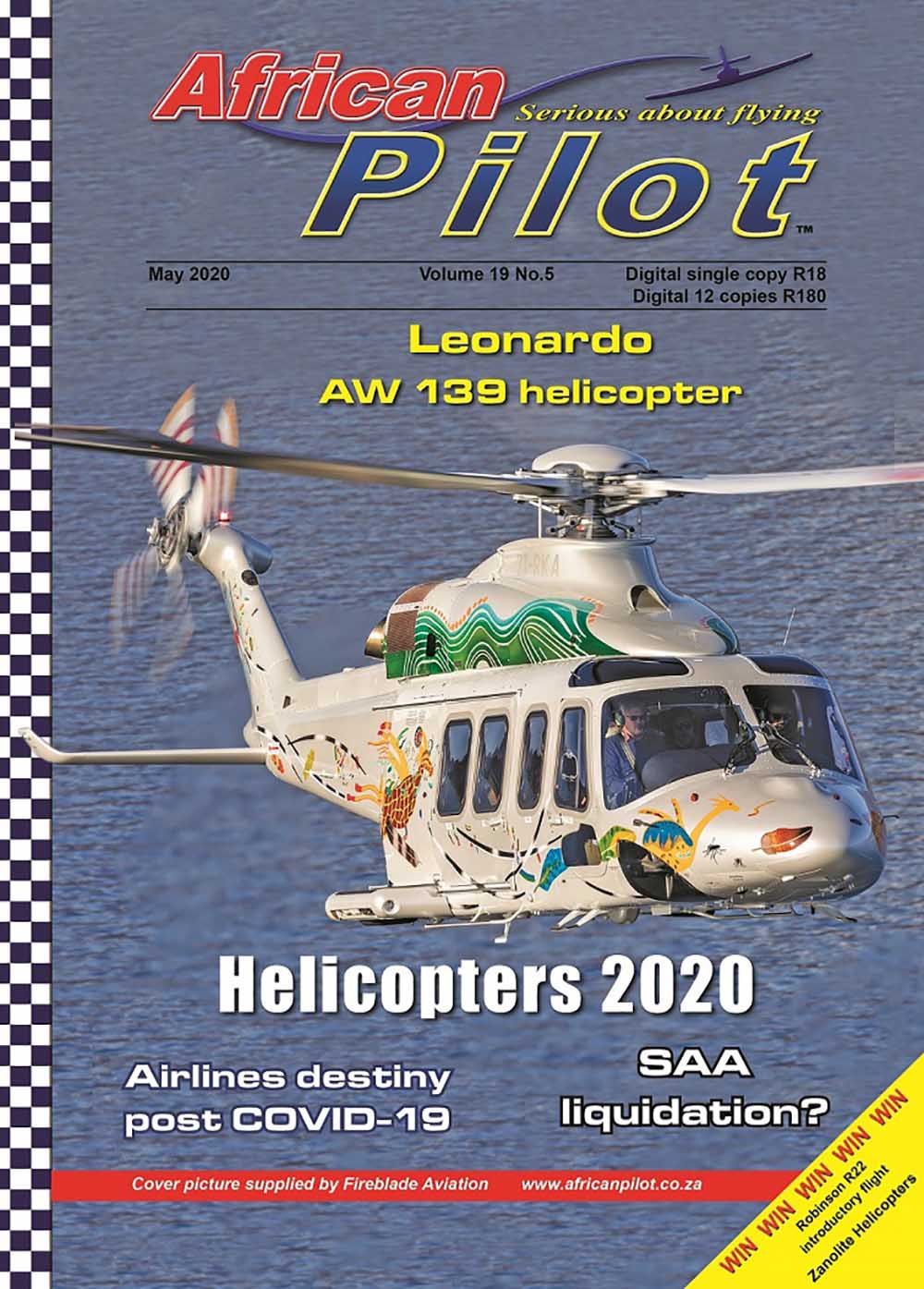 FREE preview of the May 2020 edition of African Pilot Magazine 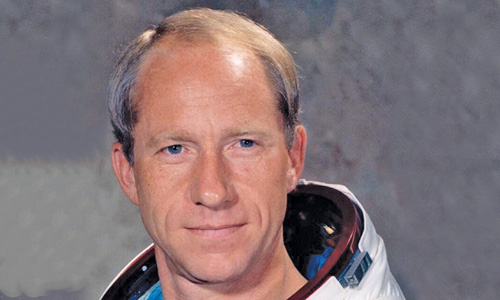 Alfred Worden, who had once been described as ‘the most isolated human being in the world,’ was the command module pilot during an Apollo moon mission. 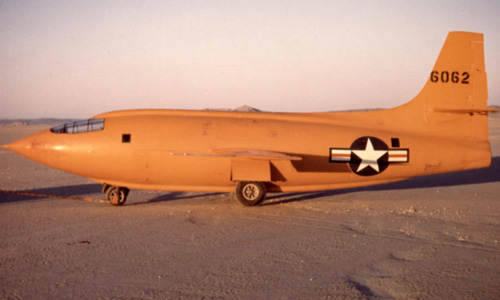 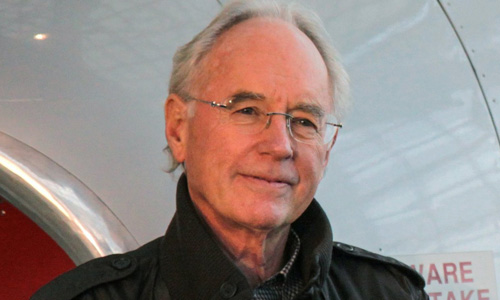 Joe Clark is the man most responsible for the wingtips now standard on new Boeing 737s. This winglet technology, installed to increase range & save fuel, is just the latest legacy of Clark’s career. 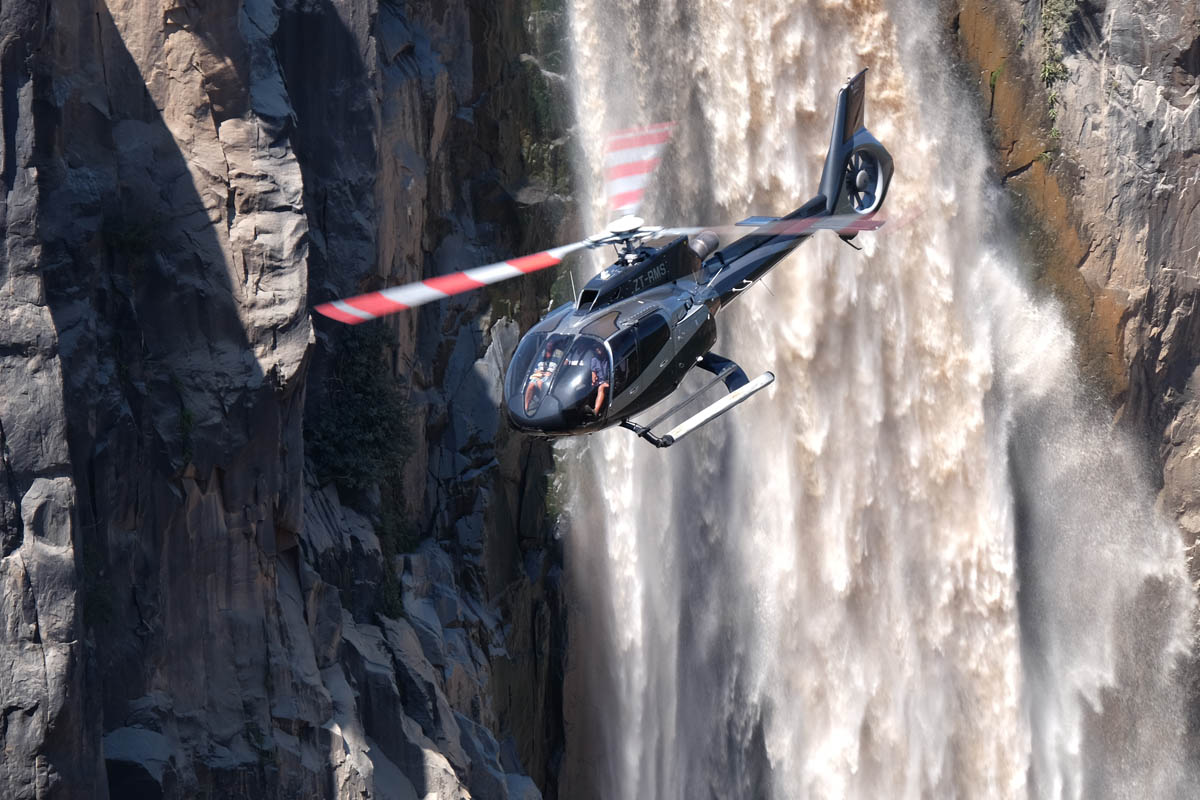 Based in Port St Johns, John is a published and award winning outdoor adventure photographer who enjoys the challenge of capturing images of helicopters flying against dramatic backgrounds such as, in this instance, a waterfall set a remote part of the old Transkei. John loves photographing aircraft in flight, but more especially the challenge of capturing images of these magnificent machines flying against rapidly changing backdrops such as waterfalls. John says “There is nothing predictable in this type of photography, slowing the shutter speed of the camera down can result in the water looking like flat white sheets, whilst speeding it up freezes the rotor blades so that the helicopter sometimes looks like a suspended static toy and in-between all of this the helicopter is moving unpredictably from well-lit areas into shadow.” John finds that he is constantly trying to anticipate and frame the image while juggling the variable options until he gets the image, he wants.

The Airbus H130T2 was flown by Jeff Goudie and Mark Sorour from Cape Town. This image was taken with John standing on the outcrop of rock on the western side of the curved rock face that forms the Tsitsa Falls. The falls drop over a slightly curved face of rock and where he was standing being at some 110 meters from the western most cataract of the falls. Depending on the volume of rain, the falls, averaging some 68 metres in height can extend all along the rocky rim or otherwise from four to five separate cataracts. Camera: Fuji series X81, lens XF18 to 135, f5.6 shutter speed 1/2200, ISO 400.